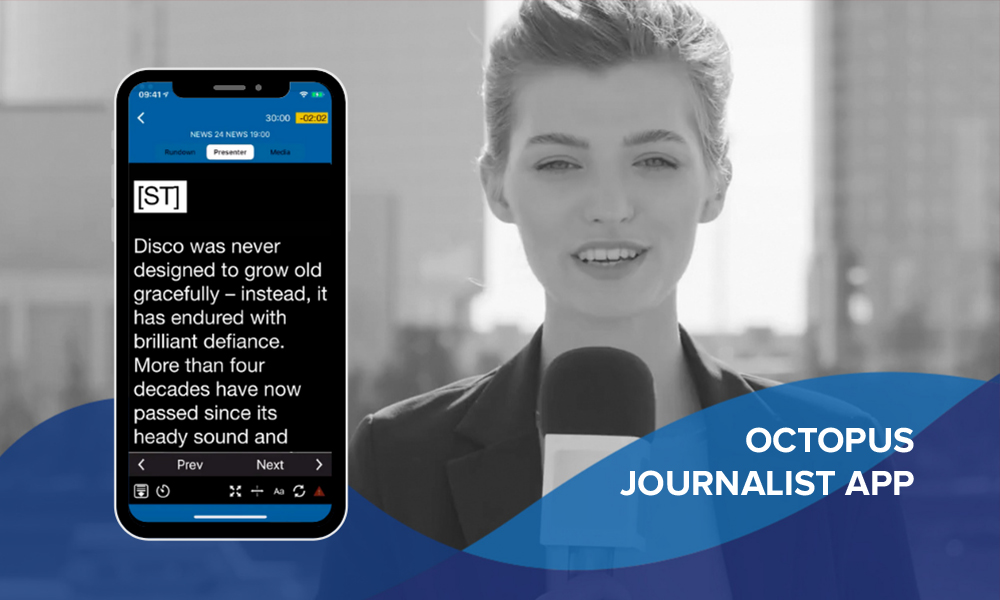 Now that data has been gathered, the story is on a roll. The next step is to find a flow for narration, employing Octopus’ collaborative skills, to later allow our second techtacle to send the prepared script to the teleprompters.

Beyond the common functionalities for script creation present on many NRCS, Octopus’ techtacles boost collaboration and remote working by allowing multiple users to work on a single script simultaneously and offering its Journalist App from which a script can be modified remotely. When the narration is planned, Octopus connects to the studio’s teleprompters or empowers its mobile app to serve as a mobile prompter that anchors can use to revive Pepper’s Ghost illusion.

On a daily basis, newsrooms are quite busy. In an Octopus-free scenario, the technical staff and the journalists are fighting over the possibility to add graphics and text to a script at the same time. When this query is over, another one comes into play. A more complex approval stage is upon as other members of the team read and edit the text even before it is finished. Therefore, technicians do not have a chance to add graphics, clips or configure camera positions while the editing lasts.

Adding Octopus to the equation equals enhanced collaboration and swifter workflows. As stories get more sophisticated, for example, packed with graphic sub-elements for various display options in the studio. Octopus allows several people to work on the same script simultaneously. As a result, the editor in charge of story visuals no longer needs to wait until the script is ready and the story is unlocked to add their part. Similarly, in the event of breaking news, script collaboration drives a speedier reaction for faster on-air production.

After refining script details, it is ready to be displayed on the teleprompter. Octopus MOS-driven connection to teleprompters allows real-time interaction between these two. Therefore, if there are last-minute changes or time-related issues, the script can be easily modified, and the updated information will be instantly sent to the teleprompter for the presenter to read.

For a personalized experience prompter-wise, within Octopus not only you can modify the story text, but you can influence different elements that will be sent over to the prompter including story elements, colors, script tags, video durations, presenters’ names, and others depending on the prompter technology.

Pushing collaboration further, Octopus’ second techtacle introduces the Octopus Journalist App designed to assist journalists when working outside the studio. Using the app, journalists may access remotely everything that they may otherwise access on-premises, including wires, rundowns, and planning items. Importantly, users can edit existing rundown scripts or create new stories on their mobile phones. When covering news on the field or live shots, they may activate the prompter mode in the app to read the script to the camera as if they were using a traditional teleprompter. For smooth coverage, the auto-scrolling option ensures that the text flows according to the reporter’s reading speed.

After all, stories are more than just text. Images are processed significantly faster by our brains than words. Consistent with our human nature, we must ensure that stories are visually appealing.

Let our third techtacle introduce you to our integration with